This is the story of Mel and his family's search through the years.

July 20, 1985 was "the day" at last when Mel Fisher, the world's greatest treasure hunter, found his dream of dreams, the priceless treasure cargo of the fabled lost Spanish galleon Atocha.

At 1:05 p.m. that amazing day, Mel Fisher learned from his son Kane that his greatest dream had been realized. The marine radio crackled to life in the Key West, Florida office of Mel Fisher at Treasure Salvors, Inc. "WZG9605. Unit 1, this is Unit 11." From aboard the vessel Dauntless of which he was captain, Kane told his beaming father: "Put away the charts. We've got the 'Mother Lode'!"

The dream that had consumed Mel Fisher for more than 16 years now came true before the eyes of the world. He had found the "rainbow's end" including stacks of silver bars, chests of silver coins, gold, jewels, and thousands of other unique artifacts from the Nuestra Senora de Atocha. Mel Fisher found what adventurous souls through centuries had only dreamed of finding!

Mel Fisher's dreams of treasure began in childhood with the reading of Robert Louis Stevenson's Treasure Island, and about pirates of the "Spanish Main". He also read about the exploits of deep sea divers in their bulky "hard hat" suits who were just beginning the exploration of the sub-sea world. There were no oceans to conquer in Hobart and Glen Park, Indiana. But at age eleven, Mel Fisher made his own first "hard hat" diving outfit to use in a mud-bottomed lagoon.

Mel learned carpentry skills from his father, Earl Fisher, and his musical talents seemed to come from his mother's side of the family. Grace Sprencel Fisher and her sisters were gifted in music and dance. Mel Fisher formed his first dance band while attending Lew Wallace High School at Glen Park, Indiana. He attended Purdue University, where he studied engineering and led his own 21-piece band. With the outbreak of World War II, Mel went into the U.S.Army. He was trained and served with the U.S.Army Corps of Engineers. Before being shipped over-seas to Europe with the Army Engineers, he studied at the University of Alabama where he was later awarded an honorary doctorate.

After the war, Mel restlessly moved to Chicago and Denver, then to Florida where he again pursued his primary interest in diving. In 1950, Mel moved with his parents to Torrance, California. They operated a chicken ranch there.

Mel continued to pursue his interest in diving while he helped with the ranch and also studied animal husbandry at El Camino College. Mel Fisher opened his first dive shop in a small feed shed on the family chicken ranch. He had a small compressor and sold "breathing" air as well as scuba equipment and parts.

In 1953, a gorgeous, red-haired girl named Dolores Horton lighted Mel Fisher's life. She was from Montana and a stranger to the ocean, but quickly became a mermaid called "Deo". On their honeymoon, the handsome young couple went diving on shipwrecks in Florida and the Florida Keys. They planned to open a store devoted exclusively to diving. To raise the money they dove commercially for spiny lobster in the frigid California waters. This was grueling but lucrative work, and they built their own business one wall at a time. Finally they opened Mel's Aqua Shop in Redondo Beach, California. This was the first "dive shop" in the world. 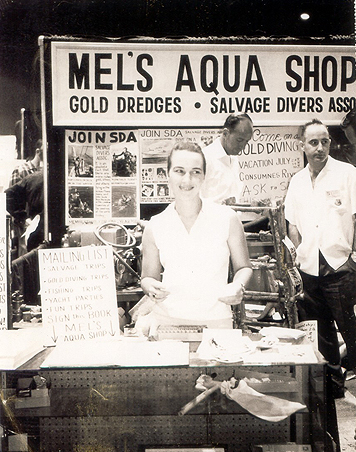 Mel and Dolores Fisher were hugely successful in this pioneering business, training more than 65,000 novices in the science of scuba diving. An undersea pioneer, Mel made early underwater films and movies, for training, advertising and entertainment purposes. When television was still young, Mel Fisher aired his own underwater adventures on weekly TV shows. Dolores personally set a world underwater endurance record that continues through the years to stand as a woman's underwater endurance record of more than 55 hours and 37 minutes, [55:37:9.6]. Mel and Deo were the unofficial "king and queen" of the underwater world.

In company with other multi-talented divers, the Fishers explored the California coast for shipwrecks, and ultimately completed several exciting treasure hunting expeditions into the Caribbean. Discoveries from these adventures were limited. But each one gave unique training to Mel and Deo.

In 1962, returning from the Caribbean through Florida, Mel had a meeting with a treasure hunter named Kip Wagner. Wagner had been attempting to salvage remains of the ten shipwrecks of the 1715 Spanish Plate Fleet lost in a hurricane off Florida's East Coast. Ill-equipped, with his crew unable to devote full-time to the project, Wagner invited Mel to join him on a 50-50 basis.

Mel, along with a hand-picked team of seven people, agreed to move to Florida and work for one year without pay while searching for the big bonanza. After 360 days of "no finds", the team was testing a device Mel invented called the "mailbox". This is a tube which is lowered from the vessels stern over the propellers while the boat is securely anchored. The engines are then put in gear and the prop wash sends a layer of clear water from the surface downward to the bottom so the divers can see. But it did more than bring clear water to the bottom so that the divers could see. The "mailbox" also dug a hole in the sand and revealed 1,033 gold coins. Mel Fisher exclaimed "Once you have seen the ocean bottom paved with gold, you'll never forget it!" They were hooked. The team continued salvaging the 1715 Fleet for another decade.

During the winter months, it was impossible to dive and salvage the 1715 Fleet because of storms and rough waters. Around 1969, Mel shifted his focus from the 1715 sites to the tropical waters of the Florida Keys in search of the Spanish galleon Nuestra Senora de Atocha which he had read about in Potter's Treasure Diver's Guide. It was a royal guard galleon with 40 tons of gold and silver aboard which sank in a devastating hurricane along with others in 1622. Mel had found a new goal worthy of this greatest effort. The hunt had begun.

One of Mel's projects was to operate a floating treasure museum. Mel searched in Europe and purchased an old ship in 1967. It was brought across the Atlantic Ocean and converted into a full size reproduction of a Spanish galleon which served as a floating museum and headquarters for Mel's operations.

In 1980, Mel Fisher topped his previous glories as a treasure hunter to discover more than 20 million dollars worth of gold and other riches of the Santa Margarita, a sister ship of the Atocha lost in the same storm of 1622. However, finding priceless treasures and artifacts is only the beginning. They must be conserved, studied, restored, recorded, and, to share them with the world, exhibited. Mel's "Ship Museum" sank in the early eighties, so, in 1987, with part of his share of treasure, Mel bought a former Key West Naval Station building to permanently house the non-profit Mel Fisher Maritime Heritage Society Museum, with research center, education and conservation laboratories, and Mel's own private headquarters.

It took years, cost lives, and challenged all who served as members of Mel's loyal crew. Mel Fisher made a commitment of his greatest personal effort to find the Atocha, believing every day that the elusive lady was ready at last to reveal her lavish secrets. Lesser men would have failed. On July 20, 1985, after more than 15 years, Mel's dream was achieved, and the Atocha's mother lode was located. Thousands of artifacts, silver coins, gold coins, many in near mint condition, period and earlier amazing Spanish objects and wares, exquisite jewelry set with precious stones, gold chains, disks, a variety of armaments and even seeds (which later sprouted!) were recovered. These and more discovered by Mel Fisher and his "Golden Crew" reflected the richest treasure find since the opening of King Tut's tomb in the 1930s. The lives of Mel and Dolores Fisher, their family and all their crew were lifted onto the world's stage as people who truly contributed to the priceless historical and cultural heritage of the world.

In the 1990s, the Mel Fisher Center, Inc. was opened in Sebastian, Florida. It primarily serves to exhibit many of the discoveries from wrecks of the 1715 Fleet.

Thousands of people: students, scholars and interested persons: come from all over the world to see the educational, cultural and historical treasures that have been raised from oblivion by Mel Fisher and his crews.

Whoever comes to see Mel Fisher also comes to share in the glory of discovery. For those who dream and persevere like Mel Fisher, "Today" is always "The Day".

"WE MISS YOU MEL!" - We know that you are with us in spirit and riding the high seas of heaven.